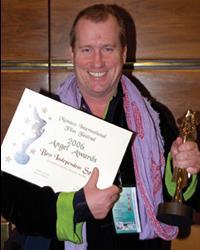 British filmmaker Kim Kindersleys research and breathtaking footage captures the deep connection between whales, dolphins and humanity and has led to the making of three thought-provoking films.

He completed his first full-length documentary The Dolphins Gift in 1991 based on his encounter with a wild hermit dolphin, Fungie, from Dingle Bay, on the west coast of Ireland. It was a meeting that profoundly changed my perspective on life explains Kim.

Two years later, in 1993, Kindersley completed his second film, The Dolphins Story, narrated by Kiefer Sutherland. Kim traveled to Belize, Central America, after hearing about another friendly female dolphin, Peto. This warm tale of a young girls dream to swim with a dolphin in the wild earned Kindersley a finalist place in the US Television Awards for Best Director.

For his third film Kim collaborated with producer Adrian Mondsey in 1994 to make The Dolphin, a Magical, Musical Mystery with Julian Lennon.

My films are a humble celebration of these beliefs and an honoring of these incredible moments with the dolphins and whales I have encountered in my travels. In every way, I want to share these stories with as many people as possible because they represent magic. This magic still exits on our planet and no matter how deeply hidden, the connection to it, I believe, exists inside everyone.in their hearts.

After The Gathering in 1998 at the Nullarbor Cliffs in South Australia, Kindersley and American philanthropist Elaine Seiler, founded Heart Magic. Originally the foundation was set up to assist the Aborigines in Australia, specifically for the Mirning people, and to raise awareness of the many other global issues threatening the planet.