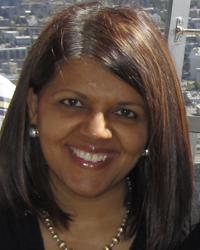 Known as Kindi to her loved ones, married and a mother of three children aged 18, 14 and 9, Kindi was born in England to young parents that had emigrated from India. Coming from a humble background, where it was unusual to "allow" young Asian women to pursue further education, she soon became noticed to be "a little different" when at the age of 23 she qualified as a Chartered Accountant. Kindi became part of a proactive team working for a Top 5 Chartered Accountancy firm in their Corporate Finance Division. Kindi moved on to work in the private sector initially as the Finance Director and subsequently as the Chief Executive, responsible for overseeing the welfare of nearly 3500 people employed at the peak of the companys operation.

As a child and in her adult life Kindi always had a great sensitivity, and much of her success and pain centered around trying to understand other people, as well as herself. She spent many years researching holistic methods of health and wellness, such as aromatherapy, homeopathy, naturopathy, acupuncture and reiki and came to the discouraging conclusion that no long lasting results could be experienced with these techniques. After witnessing the aftereffects of a devastating car accident, in which her sister, saved from death, became paralyzed, Kindi was pressed with the critical questions: Why do such things happen? How does life bring what it does? What is the point of such suffering? What is the meaning of life?

A few years later, after having immigrated to Canada and being completely isolated from family and friends, she came across the teachings of Abraham Hicks, Miguel Ruiz, Eckart Tolle, Eliza Mada Dalian and Osho, which catapulted her forward into an amazing journey of self discovery and greater consciousness.

Kindi feels very fortunate to have experienced life-changing shifts through the Dalian Method for Health and Consciousness, and also to see the benefits in her three children. She has experienced permanent improvements in health, inner peace and happiness, by releasing many of the original causes of energetic blocks, pain, and illness. Kindi now spends all her spare time committed to getting the message of greater consciousness, peace, brotherhood and equality to as many people as are wanting to listen