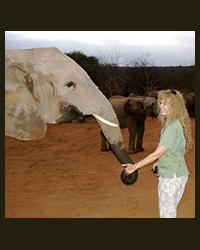 Kristal Parks is a sacred activist - of a different order. She worked as a "human shield" for threatened Mayan Indians during Guatemala's civil war; served the Hmong population in refugee camps in Thailand; and shared the suffering of incarcerated women when she did time for peaceful actions against nuclear weapon proliferation.

While living for two contemplative years in the forest, Kristal discovered that the alluring force of the Universe is Joy. She holds a B.Sc. in Biology and an M.A. in Justice, Peace and Social Transformation and in 1991 she received Buddhist precepts from Zen Master Thich Nhat Hanh.


In 2003, when attending, for the first time, an Animal Rights Conference, she heard about the suffering of elephants in the circus. Saddened by what she learned, she sought to discover who elephants are apart from the cruelty of domestication. She traveled to Asia and Africa and fell madly in love with the wild and free elephants she saw and has dedicated the rest of her life to protect them.