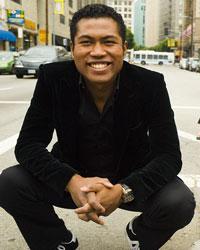 Kute Blackson is utterly unique in the world of human potential. Unlike those who promise to simply help people get what they want, Blacksons life work instead reveals to people what they have to give, by liberating who they are most truly and deeply.

Blacksons own background and experience lays out the blueprint for his approach to liberating others, setting their gifts and greatness free. Born in Ghana, West Africa, his multicultural upbringing as the child of a Japanese mother and Ghanaian father, raised in London, and on 4 different continents defies all stereotype. He is a next generation world leader out to awaken millions to Love and to Living their inspired destiny.

Hes also personally lived out the reality of challenging the expectations of others. The son of a revered spiritual leader, Blackson was speaking to his fathers congregations, in more than 300 churches, by the age of 8. At the age of 14, he was ordained into his fathers ministry and groomed to carry on the familys spiritual legacy. But his hearts-truth drew him to separate from his fathers ministry and come to Los Angeles in 1995.

Blackson courageously and daringly, sought out many of the motivational icons who inspired him while still a boy, and he was quickly recruited to market their seminars and public speaking venues. Gradually, however, he began to feel that even these enterprises were not truly addressing the core issues which eluded both the gurus and their spiritual fulfillment-hungry devotees.
Today, he acknowledges that self-help gurus from Oprah to Chopra generally do not get to the heart of what troubles usbecause their emphasis is generally on simply helping people get what they say they want. This is an outside-in approach where Blacksons approach is the opposite. Its inside-out, and it is about liberating the individual in order to give what and who they are. This is what he calls Liberated Living.

According to Blackson, once freed of the conditioned responses scripted by family, society, institutions and the media, people are no longer limited to pre-programmed interactions in the course of living. In fact, life becomes an expansive, jazzy improvisation, which is what he calls Freefall.

Blackson uses a variety of modalities to help people break out of old patterns including through the high frequency messages in his newly released Love Now CD and Love Now music video thats being watched by people around the world via the Internet. His book Live Your Wow is set for release in 2009, and he is currently developing a television talk-show for national distribution. Blackson is a bold voice for a new generation.