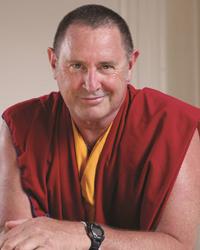 Lama Marut Born Brian K. Smith to a second-generation Baptist minister, Lama Marut had a strong interest in spirituality at a very young age, along with a passion for motorcycles, surfing, and yoga. He earned a PhD in comparative religion before becoming an ordained Buddhist monk. He has worked as a professor at Columbia University and the University of California Riverside and has published three academic books. Lama Marut is founder and spiritual director of three spiritual centers and serves as a founding board member and staff teacher at the Yoga Studies Institute.


In addition to the committed coterie of students at his centers, Lama Marut tours extensively around the US and abroad. He teaches at yoga studios, retreat centers, and public venues attended by hundreds of enthusiastic students of all ages, races, and religious backgrounds. Lama Marut appeals equally to the young, hip and urban practitioners of yoga; to Western Buddhists of all generations; and to those without formal religious affiliations looking for practical down-to-earth answers for how to live the good life in complicated times.