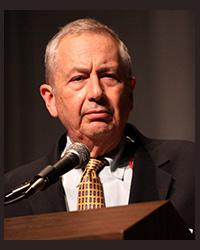 Larry Pratt has been Executive Director of Gun Owners of America for over 30 years. GOA is a national membership organization of 300,000 Americans dedicated to promoting their Second Amendment freedom to keep and bear arms.

GOA lobbies for the pro-gun position in Washington, D.C. and is involved in firearm issues in the states. GOA's work includes providing legal assistance to those involved in lawsuits with the Bureau of Alcohol, Tobacco, and Firearms, the federal firearms law enforcement agency.

He published a book, Armed People Victorious, in 1990 and was editor of a book, Safeguarding Liberty: The Constitution & Militias, 1995. His latest book, On the Firing Line: Essays in the Defense of Liberty was published in 2001.

Pratt has held elective office in the state legislature of Virginia, serving in the House of Delegates. Pratt directs a number of other public interest organizations and serves as the Vice-Chairman of the American Institute for Cancer Research.