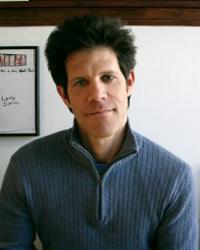 Larry Smith 'Threw spaghetti at wall: some stuck.' is the founder and editor of SMITH Magazine, and its younger cousin, SMITH Teens. SMITH Magazine is best known for launching the Six-Word Memoir project, which is a bestselling series of five books and a global phenomenon. Anticipating the microblogging explosion, SMITH originally launched the Six-Word Memoir project in November 2006 in partnership with Twitter with a simple online challenge asking: 'Can you tell your life story in six words?'


Larry has been called a 'luminary in the story world' on the A Storied Life blog, one of the 'most interesting people of the day' on CNN, and has been interviewed on storytelling and the power of the short form on The Happiness Project, True/Slant, The Gothamist, among other places. For links to interviews with Smith on NPR, The CBS Early Show, The New York Times, and elsewhere, visit SMITH Magazine's Six-Word Memoir press page.


Larry has spoken on the power of personal storytelling, how to engage an audience, and how a simple idea can make a big difference at companies such as ESPN, Google, Dell and Shutterfly, foundations and nonprofits, and schools across the country.


Larry teaches the class, 'What's Your Story: How to Deliver an Authentic Elevator Pitch,' at The Hired Guns Academy, and on-site at companies of all description and sizes.


He closed the opening day of the 2010 PopTech conference, and has spoken at AARP's National Convention, Ignite NYC, The 92nd Street Y, the New York Public Library, and elsewhere. His presentation at the 2011 SXSW Interactive Festival, 'How to Create an Internet Phenomenon for Peanuts,' was called 'Most Inspirational' by KQED Radio.