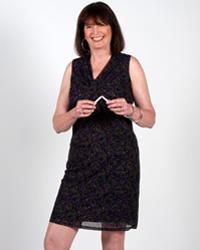 My name is Lily Gardner and I'm from Portland, OR. I had started smoking at age 19 so I had been smoking for over 30 years. I became addicted pretty quickly. I was kind of a closet smoker. I never smoked in front of my friends or in front of my husband. I would sneak off in the back garden or in little corners to have a cigarette. Even when I was on vacation with my husband, I would find ways of ducking at certain times during the day or evening and have a quick cigarette.

I'm in my mid-50's so the risk of smoking got greater even if it was just a few cigarettes. My father died from a smoker related illness so I knew I had to stop smoking for my health. A friend of mine told me about Positive Changes and it seemed like the program for me. I quit the first day and I have not had a cigarette since. I know Im done with it. I feel absolutely confident that I am finished smoking.
I'm not sure how to describe it but I now have a feeling of overall wellbeing. I just feel really good in my skin, which was kind of my stated intention when I started Positive Changes. I went in for smoking cessation, and I was interested in the weight loss, but I really wanted to just be comfortable being in my life without having to have a cigarette, a cookie, a glass of wine or just something. I think that is the biggest side benefit.

I had started getting that dry cough and it would go on all night. I guess it was smokers cough but I was kind of in denial about it. I would tell myself that it was something else but I knew what it was. A month after quitting it was gone. My blood pressure was never bad so I didn't need to worry about that but I would probably say that it is better than it was.

The first 3 days after quitting were a struggle but the difference is that prior to that I couldn't even go that long. In the past, I was on a nicotine patch but that didn't work. I would go for so long and then tear the patch off and have a cigarette. After quitting with Positive Changes, the urges just kept decreasing. When I would get an urge, I would just listen to one of my sessions and that would help tremendously. Then it just became a tool and I became more and more confident every day after that. Within 2 weeks I knew that it was over and I was no longer a smoker. I have to say at this point, it's not that I don't get cravings once in awhile during the day, but it's not overwhelming and it's definitely controllable. I just feel safe. I feel safe that I'm done with it and that's a huge relief for me. I feel that I've conquered the addiction.

I'm exercising a lot now and everything is easier. I do a 4 mile walk, I have a gym membership, and I also take a telnetic class twice a week. My husband and I also love to go bike riding on weekends. I'm no longer out of breath like I used to be. I tried to deny that it was the cigarettes that were causing it, but now I know it was. People used to tell me that I was the healthiest person that they knew and I felt like a fraud because they didn't know I was smoking. I felt like if they knew that, people would think bad of me and probably wouldn't like me as much. It is something people are appalled by these days. Smokers are really social lepers. I could sort of admit it to a few people, but even then I never smoked around them.

Smoking smells and it's a filthy, unhealthy thing, and it's pretty difficult to feel good about yourself when you know you are doing something so bad to yourself. It's also expensive and I actually felt embarrassed at times buying cigarettes. There were even a few places where I wouldn't buy them because I didn't want the people who worked there to know that I smoked.

I now move through life without second guessing myself. I just feel better with who I am now. I'm currently working on my own to lose weight but I have the confidence that since I was able to conquer the smoking, that I will conquer the weight loss thing as well. That is an additional level of confidence. The cost of the program is absolutely justified. I think it helps to pay for something. I think when you pay for something you are putting value on it and making a commitment to yourself and the program.