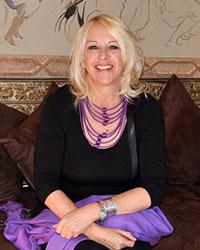 Described as a cross between Florence Nightingale and Indiana Jones, Linda Cruse is the ultimate humanitarian aid worker and subsequent author hell bent on changing the world forever.


Her determination and ethos of a 'Hand Up not a Hand Out' seems to have started a new ball rolling with world leaders, influencers and champions and it doesn't look like it's going to stop anytime soon.


In 1996, Linda, a stressed-out single mum working in a job she hated, was driving along a motorway in the middle of the night when she suffered temporary blindness. This terrifying episode led to a blinding insight: what is the point of living if living has no point? Determined to make a difference, Linda changed herself and began a new life.


Her 12 years of frontline humanitarian aid work has taken her to every continent in the world where she has assisted in some of the worlds catastrophic natural disasters such as the Asian tsunami, the Pakistani earthquake conflict zones, high mountain nomadic areas and refugee camps.


Her trademark skill is the ability to broker powerful partnerships between large businesses wanting to offer help in stricken communities but not knowing the best way and local charitites NGOs. Her work is inspired by the notion of giving 'hand-ups' rather than 'handouts.'


These combined experiences gave her the inspiration to launch the Be the Change Academy where business leaders can really be a catalyst for change. The Academy uses the entrepreneurial skills and acumen of business leaders to assist in solving some of the world's intractable problems.


Meeting Linda comes with a strong warning. At best, you'll be inspired to get involved however you may just find yourself filled with a new found energy - ready to leap over tall buildings in a single bound and joining the cause - giving back has never been so addictive.