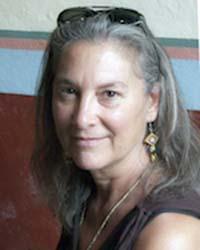 Linda Wolf is an American-born artist/photographer and author, and founder of the nonprofit organization Teen Talking Circles originally the Daughters Sisters Project. She is the daughter of poet Barbara Friedman Wolf, and cinematographer Joseph Wolf. Her photographs are housed in museums, libraries, and private collections internationally, including the Bibliothque Nationale, Paris, France; Le Zilvermuseum Het Sterckshof, Belgium; Le Musee Reatu, Arles, France, and the Photographic Center of the Tokyo Fuji Art Museum, Tokyo, Japan. She currently lives in the Pacific Northwest of the U.S. and offers retreats in Mexico.

Linda is also the founder and executive director of Teen Talking Circles, and is considered a pioneer in the revival of the modern talking circle in the therapeutic movement. In 2006, through Teen Talking Circles, she became the recipient of a seven year AnJeL Fund Grant from the Rudolph Steiner Foundation. Linda Wolf has co-authored three books also featuring her photography: Daughters of the Moon, Sisters of the Sun: Young Women and Mentors on the Transition to Womanhood; Global Uprising: Confronting the Tyrannies of the 21st Century; Stories from a New Generation of Activists;15 and Speaking and Listening From the Heart, The Art of Facilitating Teen Talking Circles, She was a recipient of the Athena Award for Excellence in Mentoring in 1997.

Wolf began her photography career as a teenager doing street photography, then living with and documenting Fanny, one of the first all-girl rock bands to be signed by a major label. She traveled with and was the official photographer for the Joe Cocker Mad Dogs and Englishmen Tour 1970. From 1970-1975

1970-1975, she lived and studied in Provence, France, attending the Institute of American Universities, and L'Ecole Experimental Photographic. Her early photographic work in France focused on people and village life in the Vaucluse Mountains. Upon returning to the US, Wolf taught photography through the University of California at Los Angeles Extension, worked as a staff photographer for the Los Angeles Citywide Mural Project and became a founding member of the organization, Women in Photography International. Her latest photo montage, "I am a Full Woman" with music by Rachel Bagby has been viewed 15, 000 times since January 2012.

In the late 1970's and early 1980's, Wolf created a public art project of bus bench murals consisting of photos of ordinary people sitting on bus benches. The photographs were placed on the sides of buses and the back of bus benches in Los Angeles, San Diego, and Oakland, CA, and Arles, France. The benches were conceived as a response to the dehumanizing effects of advertising, and were exhibited in numerous venues including the Los Angeles Municipal Art Gallery and the Rencontres Internationales de la Photographie International Festival of Photography in Arles, France. She then developed the project, "L.A. Welcomes the World," a series of large-scale multicultural portraits of people presented on billboards throughout Los Angeles, for the 1984 Summer Olympics. In 1984, she was chosen as one of one hundred international photographers to participate in the book project, "24 Hours in the Life of Los Angeles," and was the featured guest on an episode of the KNBC/PBS series, "Talk About Pictures."