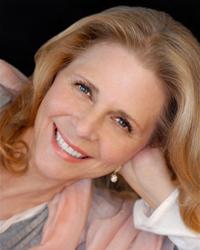 Lindsay Wagner has always been committed to the advancement of human potential. This has been evident not only throughout her highly successful acting career, but also in her personal life. She has chosen her films taking into consideration the effect they will have on the audience, and used her position as a public figure to highlight issues that are important to her, with the objective of helping people in their personal journeys.

Lindsay Wagner first came to prominence as a result of her iconic portrayal of Jaime Sommers in her Emmy award-winning role as The Bionic Woman. She also won a permanent place in the hearts of audiences around the world and became one of the most popular actresses in international television.

Once The Bionic Woman series had ended Lindsay went on to become the Queen of television movies with over 40 TV movies, 5 mini-series and 12 feature films to her name. Notable successes were 'Shattered Dreams' in 1990, which she co-produced on domestic violence; 'A Child's Cry' in 1985 about child abuse; 'The Taking of Flight 847' on the root complexities of terrorism 1988; 'Fighting For My Daughter' in 1995 highlighting the problem of teen prostitution and 'Four Extraordinary Women' in 2006 on the emotional subject of breast cancer.

Lindsay is also a published author, having co-authored 'The High Road to Health', a best-selling vegetarian lifestyle cookbook and 'Lindsay Wagner's New Beauty: The Acupressure Facelift'.

Off screen Lindsay is passionate about the awakening of human potential. The study and sharing of holistic healing modalities, encompassing mind, body and soul, is at the forefront of her mind. She has been the honorary Chair of ICAN Inter Agency Council on Child Abuse and Neglect for the last twenty years and she is also heavily involved in causes that are close to her heart, including child abuse, domestic violence and the environment. In 2004 she co-founded "Peacemakers Community," a non-profit organization that offers families and individuals more constructive and peaceful ways of relating to others in order to break the cycle of family violence. Lindsay also co-facilitated a support group for convicted batterers and their families in the LA County Jail.

More recently Lindsay has combined her personal experience and many years of study, both Western and Eastern modalities, to develop 'Quiet the Mind & Open the Heart' experiential workshops and retreats. These programs are designed to help overcome our own personal challenges, while accessing the peace and joy that is naturally within us. Lindsay offers these programs as a way of sharing, that which has greatly impacted her life.

Lindsay has presented her workshops in the US, Canada and Mexico, and in November 2008 took them to Europe for the first time holding programs for caregivers in England. In Spring 2009 she returned for a very successful three-month tour of the UK and Ireland. Her 2 and 3 day 'Quiet the Mind & Open the Heart' workshops and evening programs were held, not only for the public but included special programs for caregivers, those recovering from addictions and one for mental health practitioners from the UK National Health Service.

The UK tour also saw the release of her first meditation CD, 'Open To Oneness.' This seven-track collection of original music, together with Lindsay's powerful intention to awaken oneness a profound sense of connectedness makes her first CD a unique labor of love.

In 2010 Lindsay returned to Europe for a third tour of the UK with her workshop and seminars and also presented them in Italy as well as six states in the USA. She looks forward to taking her passionate perspective of our extraordinary human potential to all corners of the globe, inspiring others to realize how amazing they truly are.