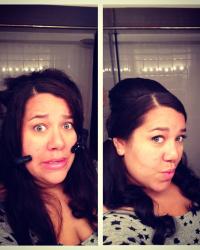 Liza is a singer, actress, panda admirer, and occasional YouTuber who's love for the musical Hamilton knows no bounds. She graduated from Penn State University (We Are!) with a BA in Theatre, longer ago than she would care to admit. After a brief stint in Los Angeles, she moved back east and has been in the NYC area ever since. When she's not performing, you'll find her spending time with her hilarious husband, chasing her nut-ball daughter around, and reading any book about teens killing each other in post-apocalyptic America.