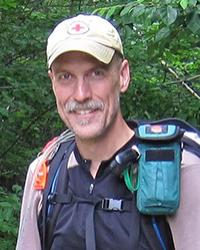 In many ways Logan McCulloch feels as if he's prepared for this project for most of his adult life. He is 52 years old and a native of Louisville, Kentucky. For the past 20 years he has been a non-profit executive with expertise in fundraising, marketing, public relations and public speaking. His current position is Chief Development Officer for the Kentuckiana Region of the American Red Cross. In 2003 he hiked 215 miles of The AT and The Long Trail in Vermont over a two week period. During that trek he adopted the trail name pseudonyms are common among long distance hikers "Unitic" which now seems somewhat prophetic given the nature and goals of this adventure.


Being an experienced backpacker he thought he was well informed about the facts of Lyme and other tick-borne diseases. He was wrong. As he began to personally experience the frustration and suffering caused by the misinformation and ignorance surrounding Lyme disease within his region and across the country, he chose to become active in the public awareness and advocacy efforts of the Kentuckian Lyme Disease Support Group. Since the spring of 2012 he has utilized the skills and relationships developed over his professional career and worked with a core group of veteran "Lyme Warriors" to succeed in:

Conversing and sharing information with the leading tick entomologist at the University of Kentucky, and the state veterinarian and Assistant Director of the Kentucky Division of Epidemiology February.

Having an article published describing my story in the Louisville Courier-Journal April.

Hosting a free community screening of the documentary Under Our Skin May.

Conducting personal meetings with the Executive Director of the Greater Louisville Medical Society GLMS, as well as the Director and staff of the Kentucky Division of Epidemiology June.

Getting a front-page above the fold article published entitled "Lyme Disease is Under Reported in Kentucky," that profiled one of the members of our group and included supportive quotes from key staff at the Kentucky Division of Epidemiology, the University of Kentucky Department of Entomology and the GLMS.