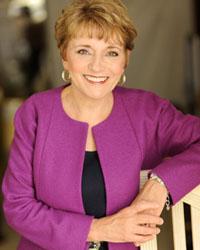 Speaker, best-selling author, and consultant for over three decades,
Mary Morrisseys transformational talks and seminars have made her one of the elite teachers in the human potential movement. She is the president and founder of LifeSOULutions, an international company
providing programs and products that transform dreams into reality.
Her work takes her weekly to different parts of the globe.

Mary is the Co-Founder and the first President to the Association for
Global New Thought. Along with Dr. Michael Beckwith, she became the first New Thought minister to be appointed to the Executive Counsel of the Parliament of World Religions. She has spoken 3 times at the United Nations as the national Co-Chair for A Season of Non-Violence, and has received the honor of being inducted into the Martin Luther King Order of Preachers. Representing the Association for Global New Thought, she has co-convened and facilitated 3 different week long meetings with His Holiness The Dalai Lama in leading conversations with world leaders, and addressing the most significant issues our world is facing. In addition, as part of the Gandhi-King delegation, she met with Nelson Mandela in Cape Town, South Africa.

She is the author of two best-selling books, No Less Than Greatness and Building Your Field of Dreams, which became a PBS special. Featured in the movies The Moses Code and Beyond The Secret, Mary Morrissey has also authored numerous audio programs, including the popular co-produced audio, Working With the Law with Bob Proctor. As a highly sought after inspirational speaker, executive coach, & corporate consultant, Mary has 30 years experience of empowering individuals in achieving new heights of spiritual aliveness, wealth, & authentic success.

Mary has a Bachelors Degree in Education, a Masters Degree in Counseling Psychology, and an honorary Doctorate in Humane Letters. She has been an ordained minister for more than 30 years. While Mary holds some significant degrees and achievements in higher learning, she says her two most important degrees are the two black belts she has earned: one in success and the other in failure.