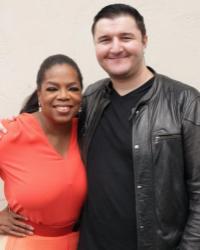 Mastin Kipp is the founder of TheDailyLove.com – a website, daily email and twitter account that serves soulful inspiration to a new generation.  Started as a feed of quotes sent to Mastin’s friends, The Daily Love shot to fame after a tweet from Kim Kardashian. And a love monster was born.

Hosting Mastin on her weekly show Super Soul Sunday, Oprah dubbed him an “up and coming thought leader of the next generation of spiritual thinkers.” Both an honor, and a mouthful. Mastin has just been named as one of Oprah Winfrey’s “Soul Teachers” in her inaugural SuperSoul 100 list.

Mastin’s mission is to connect people back to what makes them happy. Happy people make better choices, and better choices make for a better planet.

His book, Daily Love: Lessons Learned on a Journey from Crisis to Grace, was released from Hay House in September, 2014.