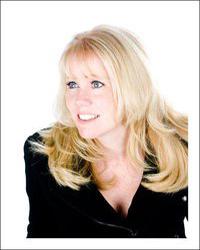 Maureen Hancock possesses the ability to connect with loved-ones beyond the grave. Her style is unlike any other medium in that she uses humor to deliver messages and soften even the hardest skeptic. Even more astonishing, she takes on the personality of the deceased providing detailed informationnames, dates, and exactly how the person passed. She brings up specific life memories that leave
participants laughing and crying. Hancock has appeared on the front page of several newspapers for both her performances and her charitable work with the 'Chernobyl Childrens Project' as well as other foundations.

While she has been interviewed nationally on radio, she's a regular morning guest on popular New England FM stations, WROR and Fun107. Hancock has been featured on two New England news stations, WHDH Channel 7 and FOX25 News. In the past, she hosted her own Comcast Cable talk show called, "Postcards from Heaven." Hancock also appears in the documentary, "41," distributed by Nehst Productions award-winning film maker, Larry Meistrich.

Maureen has also appeared in four episodes of the 20th Century Fox Television daily strip show, Wedlock or Deadlock. Hancock's giving heart shines on those in need. She spends numerous hours each week giving back and on-call for emergencies such as the loss of a child, those about to pass from cancer, and searching for missing children. Through her own charitable foundations, Seeds of Hope and Mission for the Missing, Hancock provides these services pro-bono. She is also an inspirational speaker providing lectures for several organizations including, Compassionate Friends, as well as various medical groups such as, The S.A.N.E. Program, several hospice groups throughout New England, and Relay for Life for the American Cancer Society.

Maureen's path as a medium began on an icy night in 1992, when Hancock fell asleep at the wheel and hit a tree, breaking several facial bones and fracturing her skull. The extreme trauma caused her to start to hear and see dead people throughout the day and night. Hancock believes this accident caused a 'reawakening.' As a child, she
spent three years in and out of Boston's Children's Hospital with lead paint poisoning. After coming out of her coma and returning home, Hancock reported to family members that dead people were walking through walls and closed doors. She thought everyone could see and hear these spirits.