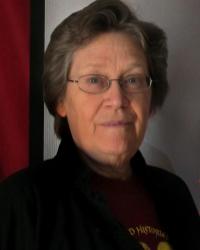 Max Dashu is a history sibyl who uses images to teach women's global history and heritages. Her legendary slideshows and webcasts bring to light the women of power hidden away from us, from the ancient Goddess icons to female leaders, culture-makers, rebels, and medicine women.

In 1970 Dashu founded the Suppressed Histories Archives to research mother-right, female spheres of power, Goddess reverence and shamanic artsas well as patriarchy, racism, and the history of domination. She began presenting slideshows in feminist bookstores and womens centers in 1973. Since then she has built up a collection of over 230,000 images, and created 150 visual presentations on topics such as Female Rebels and Mavericks, Woman Shaman, Kemetic Goddesses, Witches and Pagans, and Mother-Right and Gender Justice. She presents these at universities, women's centers, bookstores, conferences, festivals, libraries, prisons, museums, and schools.

Dashu's writings and visual talks bridge the gap between scholarship and spirituality, addressing controversies over the sacrality of ancient female figurines, the implications of recent and living mother-right societies for interpreting neolithic history, and the sexual politics of the witch hunts. Her forthcoming book The Secret History of the Witches looks at priestesses, oracles, healers, and goddesses in Europe. It asks, What happened in Europe? unveiling the story of the witch hunts, which are the prehistory not only of modern misogyny, but of racist colonial ideologies and modern fundamentalism.

Dashu publishes a poster series on sacred female figurines, petroglyphs, and breastpots draws together hidden archaeological and historic images that show strong global continuities. Her acclaimed dvd Women's Power in Global Perspective 2008 is followed by a second film, Woman Shaman: the Ancients, soon to be released.

Her articles have appeared in numerous feminist journals and anthologies, including Goddesses in World Culture (2010). She has published two videos: Woman Shaman: the Ancients (2013) and Women’s Power in Global Perspective (2008), and a series of women's heritage posters. Her Suppressed Histories page is followed by 148,000 people on Facebook, and her articles remain in the top 1% of views on Academia.edu.  Her new book Witches and Pagans (2016) is the first to be published from the series Secret History of the Witches. www.suppressedhistories.net