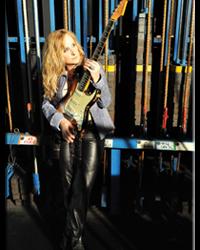 In February 2007, Melissa Etheridge celebrated a career milestone with a victory in the Best Song category at the Academy Awards for I Need to Wake Up, written for the Al Gore documentary on global warming, An Inconvenient Truth. Over the course of her more than two decades as a performer and songwriter, Etheridge has shown herself to be an artist who has never allowed inconvenient truths to keep her down. Earlier in her recording career, Etheridge acknowledged her sexual orientation when it was considered less than prudent to do so. And just two and a half years ago, Etheridge was diagnosed with breast cancer, a health battle that, with her typical tenacity, she won. Despite losing her hair from chemotherapy, Etheridge appeared on the 2005 Grammy telecast to sing Piece of My Heart in tribute to Janis Joplin. By doing so she gave hope to many women afflicted with the disease.

Born in Leavenworth, Kansas, Melissa Etheridge picked up the guitar at the age of eight and began playing in local bands in her teens. After completing high school, Etheridge was accepted as a student at Bostons Berklee College of Music, but left after only one year to make her way as a performer in Los Angeles. Her bluesy vocal style and riveting stage presence began earning Etheridge a strong following. Legend has it that in a chance encounter at a small club in Long Beach with music industry legend and Island Records founder Chris Blackwell she was signed on the spot.

Melissa's first album, Melissa Etheridge 1988, was a critically-acclaimed debut that led to an invitation to sing on the 1989 Grammy Awards broadcast. For several years, her popularity built around such memorable originals as "Bring Me Some Water," "No Souvenirs" and "Ain't It Heavy," for which she won a Grammy in 1992. Etheridge hit her commercial and artistic stride with her fourth album, Yes I Am 1993. The collection featured the massive hits, "I'm the Only One" and "Come to My Window," a searing song of longing that brought Etheridge her second Grammy Award for Best Female Rock Performance. In 1995, Etheridge issued her highest charting album, Your Little Secret, which was distinguished by the hit single, "I Want to Come Over." Her astounding success that year led to Etheridge receiving the Songwriter of the Year honor at the ASCAP Pop Awards in 1996.

Melissa continued to write, record, and tour throughout the 90s and into the new millennium, releasing Skin 2001 and the upbeat Lucky 2004 along with her DVDs Live And Alone 2002 and Lucky Live 2004. 2005 marked the release of Greatest Hits: The Road Less Traveled, which includes "I Run for Life," commissioned by Ford Cares as part of their cancer initiative in support of The Susan G. Komen Race For The Cure. The album was recently re-released in an Eco-pak, to include Melissa's Oscar winning song "I Need To Wake Up." In April 2007, Melissa Etheridge received the distinguished ASCAP Founders Award honoring the anthemic power, compassion, and generosity of spirit of her music, and her enduring status as one of the greatest all-time female rock icons. In September 2007, she released her ninth studio album, The Awakening, a collection of powerful and playful yet confessional and engaging songs that was selected as one of Rolling Stone Magazines Top 50 Albums of 2007.

Fearless Love a bold and soaring declaration for living and loving to the fullest, is the first single from Melissa Etheridges forthcoming album of the same title. Forged from Etheridges experiences as a musical and cultural activist, breast cancer survivor, parent, spouse and spiritual seeker, Fearless Love speaks to an uncompromising yearning.

I need a fearless love, I wont settle for anything less, she sings in the bracing chorus, setting the tone for the album.

Love has to be fearless, Etheridge explains. We need to have fearless love. Thats where I am right now.

The single and album were produced by John Shanks, whose first album production was Etheridges 1999 Breakdown. Since that collaboration he has risen to the top ranks of rock and pop producers with credits including Sheryl Crow, Alanis Morissette and Bon Jovi, winning the 2005 Producer of the Year Grammy Award. Fearless Love spotlights the albums solid rock foundation with the core band of Etheridge co-producing the album and on acoustic guitar, Shanks providing imaginative lead guitar, color-filled keyboards from Jamie Muhoberac and the dynamic anchor of bassist Sean Hurley and drummer Victor Indrizzo.

Fearless Love, her triumphant tenth album, out April 27th, expands on the multiple strengths that have made Etheridge one of the most beloved figures in modern rock.