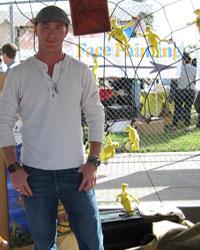 International chronicler and creator of the new weebeasts, Micah Linton was first recognized for his work as an artist and designer for more than ten years in the video game industry. Linton was responsible for creating hit video games for Dreamworks SKG, Activision, and Electronic Arts, among other entertainment publishers. His credits include writing the original concept for products which have sold over seven million units worldwide, as well as completing art and design on many other projects.

Linton owns Beast Stew, the original independent publishing and merchandising label behind his weebeasts releases. He holds a BFA from Savannah College of Art and Design, 1995, Cuma sum laude.