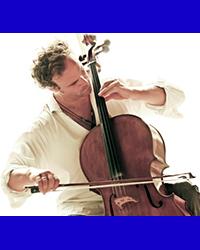 Hailed by The New York Times as possessing "A sense of humor, virtuosity, and an ear for musical dialogue," Michael Fitzpatrick has shared the stage with His Holiness the XIVth Dalai Lama for the past 17 years as part of the TUNING THE PLANET recording/film/performance platform he is spearheading. He is the recipient of The Prince Charles Award for Outstanding Musicianship conferred by H.R.H. The Prince of Wales.

From The White House to the Royal Palace in Jordan; from the United Nations to the Parliament of World's Religions in Australia; from performing for Sir George Martin of The Beatles to a performance in a Tibetan temple in the remote tip of Southern India; from the United States Capitol West Lawn with His Holiness the XIVth Dalai Lama to soloing at the Hollywood Bowl; from the high hills of Spoleto to the mountain peaks of Aspen; from collaborating with Nobel Peace Prize laureates to mentoring inner city youths; and from the historical Baptismal Site at Bethany-beyond-the-Jordan to the musical descent into Mammoth Cave - the largest cave in the world - Michael Fitzpatrick has directly shaped a global vision of tuning the planet.
Featured in the New York Times, the USA Today, on PBS' The NewsHour with Jim Lehrer and National Public Radio's All Things Considered, Fitzpatrick has performed around the world for the past 30 years, performing in concerts across Europe, the former Soviet Union, the Middle East, India, Australia, and numerous tours criss-crossing the United States and Canada. He has performed as cello soloist at The Hollywood Bowl, Lincoln Center, Town Hall, the Aspen Music Festival and most recently at the Spoleto Festival of Two Worlds' 100 Year Anniversary Concert honoring its founder, Pulitzer Prize winner Gian Carlo Menotti. He was instrumental in bringing together Nobel Peace laureate His Holiness the Dalai Lama and United Nations Messenger of Peace Muhammad Ali, performing for their historic joining and blessing of the Kumbum Chamtse Ling Temple.

Michael Fitzpatrick is the Founder of Millenia Music. He works closely with an array of creative forces across the entertainment industry and his cello solos can be heard in music for film and television.