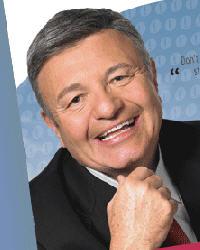 Michael E. McGrath is the creator of DecideBetter and the author of the upcoming book DecideBetter for a Better Life. He is an experienced consultant, executive, entrepreneur, author and father who has studied and applied decision-making for more than 25 years. With DecideBetter, he brings that experience to others through books, seminars, trainings, Web-based lessons and other media. Michael has been a well-known business consultant for 25 years, teaching decision-making techniques and processes to executives in some of the worlds largest companies.

He created the PACE process for use in making decisions in new product development, which today is used by more than 1,000 companies globally. He has also applied his decision-making skills as a CEO. He retired as CEO and President of i2 Technologies on July 31, 2007, after leading the turnaround of i2 over the previous two years. In 1976, Michael co-founded Pittiglio Rabin Todd & McGrath PRTM and served as CEO until his retirement in July 2004. Prior to his retirement, PRTM grew to be one of the most successful management consulting firms in the world.

Michael authored five books prior to DecideBetter for a Better Life. In 1994, one of these books, Product Strategy for High-Technology Companies, became one of the best-selling strategy books in the world. It was updated and expanded in 2000. His books have been translated into Japanese and Chinese. In addition, Michael has published more than 500 articles and given more than 1000 speeches at conferences, industry association meetings, and client seminars.

Michael has established a reputation as a strong decision-maker and credits much of the success in his life to making better decisions. He also studied decision-making for more than 25 years and developed practical decision-making techniques that he has shared with others. He created DecideBetter to further develop successful decision techniques and promote these through books and other media to help others. Michael currently serves on the board of directors of three corporations and four non-profit organizations. He has a B.S. in computer science from Boston College 71 and an M.B.A. from Harvard Business School '73.