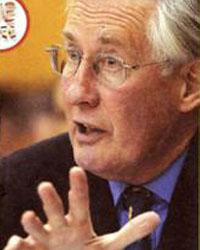 Michael Meacher has been Labour Member of Parliament for Oldham West in the North of England since 1970. He stood for the leadership of the Labour party in 2007.

Michael Meacher was first elected to the British Parliament in 1970 after studying at Oxford University and the London School of Economics. He served as a junior minister under the Prime Ministers Harold Wilson and James Callaghan, and was one of the longest serving ministers in Tony Blair's Labour government, from 1997 to 2003, and gained a reputation for being able to master a complex brief. Since then he has attacked the government on a number of issues, particularly on genetically modified food and the Iraq war. He stood for the leadership of the Labour party in 2007. A long term campaigner on the issue of climate change, he brings both passion and intelligence to the question of our destination as a species and the purpose of life.