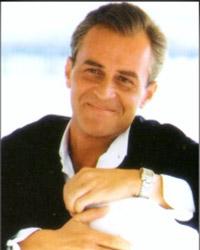 Michael St.Clair, an astrologer born in Zurich, Switzerland, has a vast and highly accurate track record of economic and political predictions. As a young man he studied law and political sciences at Zurich University and also served as a Swiss army intel officer before beginning his career advising high-profile clients in special situations world wide. After twenty years of advisory activity and of esoteric and economic studies, he created in 1999 a stunning twin work of cosmology and metaphysics. St.Clair's 'Atlantis Oracle' & 'Icons Of Destiny', redefining mundane astrology and divination, revealing other forces delineating the future of mankind.

In 2002 St.Clair published his acclaimed book "Passage 11" on the internet, which some have termed the true spiritual thriller of our time. It explains in easy to understand words our true History and its Cosmic genetics.

In 2005 St.Clair began to see the development of a future Contact Center, and the spread of Radiant Zones. Sacred islands of light appearing all over the earth, as well as a City of Gold in the land of the Alpine Celts. His web site Light-Seeds.com is consulted daily by thousands who actively prepare for this crossing into the 5th world cycle.