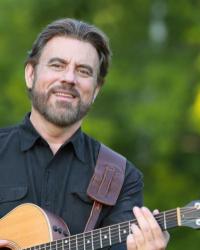 In the mid-1980s, Michael Tomlinson found himself in the rare position of being an aspiring singer/songwriter having a number one hit - before he had ever even released a record. A homemade cassette of his song, The Climb, had been given to the manager of popular Seattle radio station, KEZX, where it became the most requested song in the station's history. Within six months time, Michael had given up his bicycle repair job in Austin, Texas, and made Seattle his home. Drawing from the loyal listener support that he'd found in the Pacific Northwest, Tomlinson recorded and released his first album, Run This Way Forever, on his own Desert Rain label. The record sold 15,000 copies in Seattle in it's first month and was picked up by a dozen independent stations around the US, where many reported it as their most requested album of the year and sold over 100,000 copies.

On this momentum, Michael Tomlinson signed a recording contract with an emerging Los Angeles label and scored a Top 10 Adult Contemporary Hit with his song, Dawning On A New Day, from this second album, Still Believe. His music, which had been previously known at only a handful of alternative stations, was now being featured on national TV and played on radio stations in nearly every city. On the strength of his next two releases, he began headlining major theaters, The Greek and Universal Amphitheaters in L.A., The Paramount in Denver, Wolftrap in Washington, D.C., and many others around the U.S.

As much as Michael enjoyed the success he was having on radio and in concert, he was less pleased with the frequent behind the scenes dealings involving record companies and distributors. Feeling that he would be happier releasing his music on his own label again, Michael challenged the record companies involved and successfully regained ownership of all his music, reclaiming full rights to all his publishing, master recordings and copyrights. He then returned to his home in Seattle to resume recording on his own small label, Desert Rain. From that time on he began to fashion less a career than a life, an ongoing process of merging his music and personal life into an evolving collection of songs, CDs, concerts and retreats.

Widely known for his friendly concerts, funny stories and warm, goodwill onstage, in the 1990s, Michael took his performing in a new direction and began hosting weekend retreats called "A Gathering of Friends" using his music to bring people together in friendship, laughter and goodwill to a rustic village on the Olympic Peninsula. It was a fulfilling time and many of his new songs came directly from that time of communion and soul searching.

Michael Tomlinson has recently released a powerful new album, The Way Out West, recorded over a two year period with the support of talented musicians from across the U.S. and Europe. The album is a vibrant collection of songs ranging in styles from folk and pop, to jazz and rock - and reviewed by RockTimes of Europe as a "Top 10 Album of the Year." Michael continues to reside in the Pacific Northwest, and is now composing a collection of new songs for his next release and performing a combination of solo and band concerts around the United States.