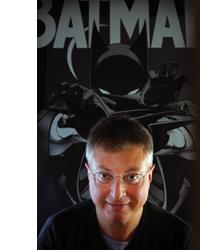 Michael Uslan is a Producer of film, an author, national lecturer, and carries three degrees. He has helped bring some of the most memorable films to the big screen.

Uslan was involved in films such as Batman, Batman Returns, Batman Forever, Batman & Robin, Batman: Mask of the Phantasm, Constantine, National Treasure, The Spirit, Batman Begins, and the second highest grossing film of all time, The Dark Knight. As a producer, he is one of the highest-grossing movie producers of all time, with The Dark Knight alone having already passed the 1 billion mark through box office receipts alone.

At age eight, comic book fan Michael Uslan dreamed that one day, he would write Batman comics. He made it his lifes goal. As an undergrad at Indiana University in the 1970s, he participated in a program that allowed students to pitch ideas for classes at the school. If the dean and his advisors accepted the class, the student could teach it. Michael pitched a class on comic books as modern mythology. Against all odds, and a particularly curmudgeonly board member who needed to be shown the parallels between the story of Moses and the story of Superman Michael tells it a lot better than I can, his course was accredited.

Not content with his victory, Michael decided to stoke the media. He called a reporter for United Press International, posing as an outraged citizen, angry that they were teaching funny books at the University. Within three days, he was called by that reporter to talk about his class. The UPI story was picked up by newspapers worldwide, and Michael got his first 15 minutes of fame, resulting in calls from both Sol Harrison at DC Comics and Stan Lee at Marvel. As an undergrad, he landed a job at DC Comics, writing the comic book version of the classic pulp character The Shadow. He was noticed by Julius Schwartz, editor of the Batman line at the time. Hey kid, I read your Shadow script. It didnt stink. Wanna take a shot at Batman?

With his dream fulfilled before he even finished college, Michael decided he needed another dream so he settled on making a dark and serious Batman movie that was true to the origins of the character, escaping from the campy approach taken by the TV series. And if you think his journey up to that point was interesting, the story of how he made it from undergrad to owner of the film rights to Batman, the battles with the studios to take comic books seriously all the trailblazing he did in Hollywood to make comics acceptable as mainstream fare will find you mesmerized. His story shows how it works, instead of just being a tips panel for beginners. He takes you inside the meetings with the top brass and shows you how he sold ideas like Batman and Constantine what Michael had to do to sell the idea to the studio actually turned out being more brilliant than the film was.

He has also written a number of comic books, including the critically-acclaimed revival of The Shadow for DC Comics. His bibliography also includes dozens of books that chronicle the history of comics including America At War A History of War Comics, Mysteries in Space A History of Science Fiction Comics, and The Pow Zap Wham Comic Book Trivia Quiz Book.

In September of 2009 and lasting through the opening of 2010 Uslans work as a comic book writer will be highlighted in a six-issue story arc in Archie Comics that is already getting national media attention. Archie Gets Married will run across issues 600-605 of the Archie Comic title that has been running for six decades, starting the titles 600th issue, a milestone reached by fewer than a dozen comics in the history of the medium.

Uslan is the recipient of The Emmy Award as Executive Producer of the popular children's series Where on Earth is Carmen Sandiego?, an Annie Award for the animated movie Batman Beyond: Return of The Joker, and a Peoples Choice Award for the movie Batman. His other producing work in television includes Robin Cook's Harmful Intent and the chilling PBS mini-series Three Sovereigns for Sarah with Vanessa Redgrave, based on the true story of the Salem Witch Trials. His blockbuster production Batman received a People Choice Award and an Academy Award for best Production Design, going to Anton Furst. The Dark Knight also received five Peoples Choice Awards as well as two Academy Awards, including the Best Supporting Actor Oscar for Heath Ledgers groundbreaking performance as The Joker.

Uslan currently has several projects in development including a live-action film based on the DC Comics title Shazam with Pete Segal directing, and a new version of the classic pulp fiction character The Shadow, with Sam Raimi. More project announcements are being prepared for Comic Con International in July 2009. He has also opened a new firm called The Uslan Company, where he will act as a producer for hire for the development of movies, TV, video games, interactive media and other projects.

He also received the WestPoint Cadets Choice Award when he spoke before all the cadets in May of 2009.