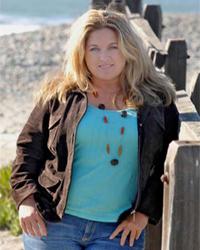 Michelle Renee is a single "Mom on a Mission", published author, speaker, owner of Now dreamBIG, a media coaching, PR and
consulting firm, and a 2008 MSN Hometown Hero.

She and her daughter endured a horrifying violent crime that captured
national attention and is the focus of her debut book, Held Hostage:The True Story of a Mother and Daughter's Kidnapping. Michelle shares her journey with passion, grit and courage. From the dark aftermath of violent crime, confronting her abusive past in order to embrace what she calls "her now" and what it took for her and her daughter to overcome this devastating tragedy with self-love, gratitude and a vision for positive change.

Michelle enjoyed a successful 13-year financial industry career; a corporate climb that ended as the result of the violent kidnapping, as Assistant Vice President for one of the nation's largest banks. Michelle has been awarded for her success in banking as well as for her leadership in our community and crime victim advocacy. Michelle
studied Communications with an emphasis on Public Relations at the University of Alaska.

She is the Founder of The Violent Trauma Awareness Project & Rock To Stop Violence and is an active advocate involved in Violence Against Women and Post Traumatic Stress Disorder awareness efforts.
She is a member of the Global Peacebuilders Project, National Association of Women Executives, was named Soroptimist International's 2007 Woman of Distinction, and interviewed with Gayle King for a "what would you do/help women stay safe" segment. In 2008 Michelle was honored to be added to the Chicago Children's Hospital Trauma Center Survivor Wall, became a Family Advocate for the National Child Traumatic Stress Network and Children's Hospital Chadwick Center n San Diego and will be featured on The Biography Channel and A & E Television. Michelle resides in Southern California with her daughter, Breea.