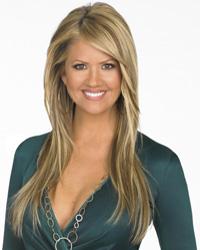 Named one of "Television Week's" 10 Most Bankable Stars in Syndication, Nancy O'Dell has proven to be a force in all areas of her career as a journalist, author, producer and entrepreneur. One of the country's most respected and leading entertainment journalists, O'Dell was on the team which started "Access Hollywood" and served as anchor for 13 years from 1996 to 2009. She has also contributed reports to NBC News's "Today" show and "Dateline." She is a published author, with her first book "FULL OF LIFE: Mom-to-Mom Tips I Wish Someone Told Me When I Was Pregnant" debuting in the top three of all motherhood books and as a top-selling gift book. 'FULL OF LIFE' was released by Simon Spotlight in April 2009. O'Dell also recently added to her success as a business woman by debuting a line of high-end outdoor furniture called "Red Carpet by Nancy O'Dell" carried in stores across the nation. She is also a partner with the nation's largest mom video-blogging website "Momversation" and contributes on a regular basis.

O'Dell has been chosen by NBC for the last nine years to host two of their popular annual network broadcasts, "The Golden Globes Arrivals Special" and "The Tournament of Roses Parade." In 2007, she hosted the backstage portion of "The Golden Globe Awards" telecast itself. She also hosted the "Emmy Awards Red Carpet" pre-show for NBC 2006, ABC 2000, and Fox 1999. A member of the Academy of Country Music, O'Dell was the original host and consulting producer of the long-running country music talent search series, "Nashville Star." Recently, O'Dell has been seen several times on the Emmy award-winning television series "30 Rock" in guest roles, as well as on Disney Channel's "Hannah Montana", and made a coveted celebrity appearance on Sesame Street. In 2006, she appeared in the Golden Globe-nominated film "Thank You for Smoking" and had a recurring role as herself on FX's "Dirt" from 2006-2008. In 2009, she hosted NBC's coverage of the Kentucky Derby with Bob Costas, as well as the Bravo special "Ladies First: Bravo at the Kentucky Derby." In 2003 and 2004, she co-hosted ESPN's "ESPY Awards Red Carpet Show" and NBC's broadcast of "Christmas in Rockefeller Center" in 2004 with Al Roker. O'Dell hosted Miss USA 2004, 2005, 2006 and in 2007, she made history by being the first woman to ever host the beauty competition while pregnant. She also hosted Miss Universe in 2005, and the annual "Prism Awards" on the FX channel in 2008 and 2009.

An award-winning journalist, O'Dell has been honored with three Associated Press Awards, two Society of Professional Journalists SPJ Awards, an Emmy Award and has been nominated for seven additional Emmys. In 2009, O'Dell was honored by the entire beauty industry for the inaugural Beautiful Humanitarian Award by the Professional Beauty Association, an award given to a public figure who exemplifies beauty both inside and out. In addition, she was nominated two years in a row 1999 and 2000 for the prestigious ICG Publicists Guild Press Award, recognizing excellence in entertainment reporting. She was also ranked by Shape Magazine as one of the 20 Hottest Stars Right Now.