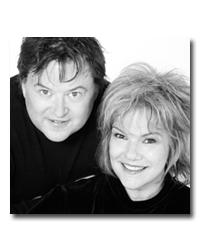 The music of Narayan & Janet is beginning to create a groundswell among the ever-growing numbers of people who want music to reflect their spiritual awakening and nurture a sense of love and joy.
For their second album together, ALL BLISS, the Seattle-based composer/musicians teamed up with producer and grammy-award-winning guitarist Eric Tingstad.
The album features a blissful blend of Narayan & Janets vocals, Hammond B-3, muted trumpet and flugelhorn, together with Erics distinctive guitar sound. ALL BLISS evokes influences from Fleetwood Mac to Sade, Chris Botti to John Lennon.
Janet & Narayans modern musical sensibilities are gained from a lifetime of diverse musical experiences. Janets career began with playing in the bands of Albert Collins, James Cotton, Merrilee Rush and Randy Bachman, and culminated in such achievements as her MTV video Backstreet Boy, her solo act at the famous Edgewater Inn, an all-girl trio in Las Vegas, and a period touring and recording with New Age artists Dave Lanz and Paul Speer. Narayans background includes years of international touring as a featured trumpet soloist. He has been showcased in big bands, musical revues, R&B and world-music acts from African to Reggae. He also spent a period studying music in India. These diverse experiences allow the duo to thrive in a wide range of musical environments, such as backing up the Spencer Davis All-Star band with Alan White Yes and Roger Fischer Heart or providing a spirit-filled musical soundtrack for yoga and creativity workshops.

Vision Statement
To create, perform and promote music & lyrics that are expansive and life-affirming. To help advance music beyond its current common usage as entertainment or stimulation, and utilize its power to inspire, heal and uplift.

Composing music with Sacred Intention
Performing this music with uplifted consciousness in receptive venues
Promoting awareness of Sound and Music's effect on us so we can make healthier choices
Infusing conscious music into every possible form of media, including radio, television, movie soundtracks and advertising
Creating opportunities and opening venues for conscious musicians and audiences
Connecting communities through shared musical experiences
Increasing the appreciation of Music, Art and Beauty in our society