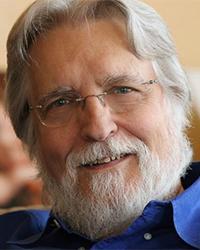 Neale Donald Walsch is a modern day spiritual messenger whose words continue to touch the world in profound ways. With an early interest in religion and a deeply felt connection to spirituality, Neale spent the majority of his life thriving professionally, yet searching for spiritual meaning before beginning his now famous conversation with God. His "With God" series of books has been translated into 27 languages, touching millions of lives and inspiring important changes in their day-to-day lives.

Neale began his journey in the most ordinary way. Overstressed and overextended by modern day life when the options ran out and frustration reached its peak, he turned to God. Desperate questions scratched on a legal pad in the middle of a long, sleepless night, began a precious dialogue which changed Neale's life forever and eventually changed the lives of millions. This process began over 10 years ago and became the much-loved Conversations with God Series.

Today the books have been translated into 37 languages, and Book One remains to this day in the 100 top selling spiritual books on Amazon.com.

In addition, to bring through the extraordinary "With God" series, Neale has authored 16 other works, as well as a number of video and audio programs. Available throughout the world, each of the first five CwG dialogue books has made the New York Times Bestseller list, Conversations with God-Book 1 occupying that list for over two and half years.

The With God Series has redefined God and shifted spiritual paradigms around the globe. In order to deal with the enormous response to his writings, Neale joined with loved ones and friends to create the Conversations with God Foundation, a non-profit educational organization dedicated to inspiring the world to move from violence to peace, from confusion to clarity, and from anger to love.

Neale's work has taken him from the steps of Macchu Picchu in Peru to the steps of the Shinto shrines of Japan, from Red Square in Moscow to St. Peter's Square in Vatican City to Tiananmen Square in China. And everywhere he has gone-from South Africa to Norway, Croatia to The Netherlands, the streets of Zurich to the streets of Seoul, Neale has found a hunger among people to create a way to live, at last, in peace and harmony. He has sought to bring men and women in every culture a new understanding of God and of Life which would allow them to experience that.

Neale was born into a Roman Catholic family living in Milwaukee, Wisconsin. His first spiritual teacher was his mother, who taught him not to be afraid of God, as she believed in having a personal relationship with the Divine. She taught Neale to do the same. A non-traditional believer, Neale's mother hardly ever went to church, and when he asked her why, she told Neale, "I don't have to go to church-God comes to me. He's with me and around me wherever I am." This view of God in his childhood would open Neale fully as an adult to transcend the traditional views of organized religion and bring to the world the message found in Conversations with God.

An insatiably curious child, Neale's comments about life seemed to possess a wisdom far beyond his years, and caused relatives and family friends to often ask, "where does he come up with this stuff?" While attending a Catholic grade school, Neale would often pose questions in Catechism class that would extend past the traditional grade school curriculum. Finally, the parish priest invited Neale to his rectory to answer questions. This meeting turned into a once-a-week visit that blossomed into an open forum where Neale learned not to be afraid to ask questions about religion and spirituality, and also learned that his asking these types of questions did not mean that he would offend God.

By the age of 15, Neale's involvement with spiritually-based teachings led him to begin reading a variety of spiritual texts, including the Bible, the Rig Veda, the Upanishads and Divine revelation according to Sri Ramakrishna. He noticed that when people got involved in religion they seemed less joyful and angry, exhibiting behaviors of prejudice and separateness. Neale concluded that the collective experience of theology was not positive.

After graduating from high school, he enrolled at the University of Wisconsin at Milwaukee, but academic life could not hold his interest and he dropped out of college after two years to follow an interest in radio broadcasting that eventually led to a full-time position at the age of 19 at a small radio station far from his Milwaukee home, in Annapolis, Maryland.

Restless by nature and always seeking to expand his opportunities for self-expression, Neale in the years that followed became a radio station program director, a newspaper reporter and, ultimately, managing editor, public information officer for one of the nation's largest public school systems, and, after moving to the West Coast, creator and owner of his own public relations and marketing firm. Moving from one career field to another, he could not seem to find occupational satisfaction, his relationship life was in constant turmoil and his health was going rapidly downhill.

He had relocated in Oregon as part of a change-of-scene strategy to find his way, but Fate was to provide more than a change of scene. It produced a change in his entire life. A car driven by an elderly gentleman made a left turn directly into his path, Neale emerging from the auto accident with a broken neck. He was lucky to escape with his life.


Over a year of rehab threw him out of work. A failed marriage had already removed him from his home, and soon he couldn't keep even the small apartment he'd rented. Within months he found himself on the street, homeless. It took him the better part of a year to pull himself together and get back under shelter. He found, at first, modest part time jobs, once again in broadcasting, then worked his way into full-time employment and an eventual spot as a syndicated radio talk show host.

He had seen the bottom of life, living in the weather, gathering beer and soda cans in the park to collect the return deposit, but now he seemed to be on a roll again. Yet, once more Neale felt an emptiness in his life. In 1992, following a period of deep despair, Neale awoke in the middle of a February night and wrote an anguished letter to God. "What does it take," he angrily scratched across a yellow legal pad, "to make life work?"

Now well chronicled and widely talked about, it was this questioning letter that received a Divine answer. Neale says that he heard a voice, soft and kind, warm and loving, that gave him an answer to this and other questions. Awestruck and inspired, he quickly scribbled these responses onto the tablet.

More questions came, and, as fast as they occurred to him, answers were given in the same soft voice, which now seemed placed inside his head. Before he knew it, Neale found himself engaged in a two-way on-paper dialogue. He continued this first "conversation" for hours, and had many more in the weeks that followed, always awakening in the middle of the night and being drawn back to his legal pad. Neale's handwritten notes would later become the best-selling Conversations with God books. He says the process was "exactly like taking dictation," and that the dialogue created in this way was published without alteration or editing.

In 2001 Neale founded Humanity's Team, which he has described as a worldwide civil rights movement for a soul HumanitysTeam.com. In 2005 he began work on putting into place a global education program, The School of Theology of the New Spirituality Schooofthenewspirituality.com. In early 2006 he created The Group of 1000, a community of supporters who seek to place Schools of the New Spirituality in cities, towns, and villages from around the world.

In August, 2016 he began another conversation with God, and decided this had to be shared with everyone.  Conversations with God, book 4, Awaken the Species was published by Rainbow Ridge, March 2017.