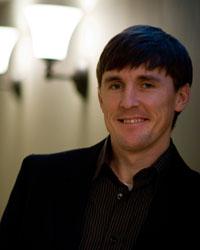 After growing up in eight different homes in six different towns, Nick Tasler has carried on the same nomadic pattern in which he was raised. After beginning his career at Andersen Consulting, Tasler decided one day that he was not finished with his formal study of psychology. Following three cross-country moves in less than a year, he settled in San Diego, enrolling in the first graduate program that allowed him to start immediately. After landing the right job and finding the right mate to balance his impulsive tendencies, he realized that he had a predisposition for novelty that expressed itself in impulsive behavior.

In his study of organizational psychology and individual excellence, Tasler uncovered fascinating, largely unknown research revealing a genetic tendency toward novelty seeking and impulsive behavior. This impulsivity gene surfaced at the same time ancient humans left Africa and began to develop civilization as we know it. Tasler understood that this gene could be a cornerstone of modern civilization and wondered if impulsivity commonly regarded as a persons worst enemy could also be a persons best friend, if humans could learn to guide it properly. The Impulse Factor is his answer to that question.

Tasler is the head of Research and Development at TalentSmart, a think tank, consultancy and leading provider of cutting-edge psychological assessments. He has studied and worked with hundreds of thousands of people from all walks of life, from corporate executives to cosmetology students. His skill at bridging the gap between complex concepts and simple solutions has directly benefited multinational corporations, including GE and Coca-Cola as well as smaller, privately-owned enterprises and industries ranging from government to healthcare, from pharmaceuticals to financial services.