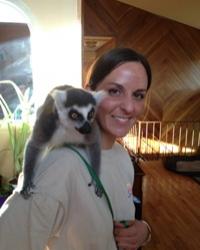 The path of Nicole Chillemi's life has always been paved by her love of animals. "I have learned so much from the animal friends I have shared my life with. One of the first, and greatest, lessons came when I was about 10 years old. I found a baby robin under a tree. My parents and I took him to the vet and learned how to properly raise him. For the first time in my life there was a little being that was dependent on me. After a few months, it was time to let him go. I realized that as badly as I wanted to keep him it wouldn't be fair and so I took him to my backyard, kissed him on his head and said good-bye. Although I couldn't keep him, the lessons he taught me would be with me forever; lessons of love, friendship, responsibility, caring, and ultimately, unselfishness. These are the lessons that I have carried with me through the years. They are the lessons that made me realize that I wanted nothing more than to share my life with as many animals as I could. After that experience I went on to volunteer with an adoption agency, Paws to Love Adoptions. I also met a couple of wildlife rehabilitators, named Lou and Ro, and worked alongside them from when I was 13 until now. In 1998, as soon as I turned 16, I got a job at a local animal hospital. I became a Licensed Wildlife Rehabilitator in 2000, and graduated from Mercy College in 2004 with a bachelor's degree in Veterinary Technology. I then went to work as a Licensed Veterinary Technician at Valley Cottage Animal Hospital. Unfortunately, in May of 2005 my allergies to cats became extremely severe and with great reluctance I had to make a career change. I am currently training animals for movies, commercials, TV shows etc. and share my life and heart with a number of amazing creatures."