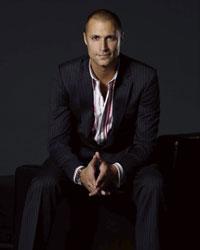 British-born, Nigel Barker started his career in fashion in the late eighties working in Paris, Milan and London, finally setting up his own photo studio in New York City in 1996 and has since become an internationally renowned fashion and portrait photographer.

Barker is highly regarded for his work as photographer and judge from the popular TV show, America's Next Top Model, which airs in over 125 countries and has an audience of more than 100 million viewers each week. Cycle 12 premieres in March 2009.

Nigels ever expanding presence in the industry has resulted in new projects such as the creation of his own show, The Shot on VH1. He directs and produces commercials, films, and documentaries for various clients from the fashion and entertainment industry and real-life human-interest stories.

Additionally, Nigel has always been involved in charity work and due to his celebrity on Top Model, he has been able to spread his humanitarian message to a vast audience. He works closely with such charity organizations as: The Humane Society of the United States and International, Make-A-Wish Foundation, Do Something, Elizabeth Glaser Pediatric AIDS Foundation, and Edeyo a relatively young charity that provides food and education to impoverished, Haitian school children.

Nigel Barker lives in New York City with his wife, Cristen and their two children Jack and Jasmine.