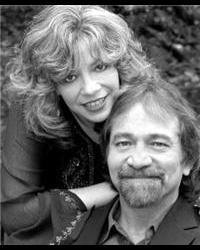 Niobe Weaver and Gil Yslas are visionary artists who were brought together through divine movement. As a licensed massage therapist, REKI Master and Healing Touch practitioner, healing with Sound had been Niobe's focus for several years. Together with fellow practitioner Bob Milewski, a series of workshops were developed and they enjoyed great success. The next choice was to look into creating a CD. Doing volunteer service work, Bob was reading for the blind at Christmas, 2001; he found an article in the Bravo section about Gil and his new CD release "Christmas". Passing the article on to Niobe, she called up the studio and set a date to meet Gil in January, 2002. Gil brought over 25 years of performing and music experience. Through his own record label Sundown Records he had recorded and produced over a dozen CD's of New Age and Renaissance music that has been played around the world.

Quickly they discovered that their talents and gifts created a synergy that tapped into Spirit, and led them to write, record and create the CD "Language of Light". The message and music of this CD touches the listener at the soul level. The unique vibration of Niobe's melodic voice singing in the spirit language of light speaks to the heart of the CD. A consumate guitarist, and prolific with melody composition, Gil's gift for production and recording captured the warmth of Niobe's vocals and the result is magical.

The response from this collaboration has inspired Niobe and Gil to offer the message and music through concerts, church services, yoga centers, presentations to organizations, and workshops. They continue to create and perform their original music together. The current release of Gil's solo guitar album "Liquid Blue Sensual Music for Guitar" will be available through CDBaby. They are currently in production on a follow up album for Niobe.