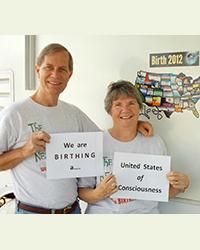 Dr. Noel Marshall, and her 'LightPartner' husband, Bob Warner, were recently awakened to their evolutionary impulse by Barbara Marx Hubbard and the Shift Network's Birth2012 movement. After becoming Birth2012 Mentors, they followed their evolutionary drive...and took the word 'drive' literally. Over a six month period, they made over 100 presentations in 49 states, Canada and Australia. Noel and Bob established their own organization, "LightPartners" www.LightPartners.org not "LightWorkers" as Noel doesn"t like to "work" Together they co-founded the "Co-Creators Convergence" which brings together evolutionaries promoting sacred activism.

Before Birth 2012, Noel's eclectic career had included scientific and clinical research, work as a speech/language therapist, University faculty member, real estate investor and broker. She holds a pilot's license as well as a PhD in Communicative Disorders from the University of Texas and has been published in scientific as well as non-scientific publications. Noel was born a Quadruple Sagittarius, raised in the Washington, DC area, and is the 7th of 15 children. Along with 40 other beautiful beings including Barbara Marx Hubbard, Noel contributed a chapter to the recently-released book - ReVeolution The Return of the Divine Feminine - compiled by Deyne Robbins and available on Amazon and Kindle.