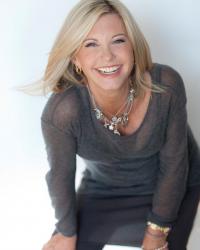 With a career spanning over five decades with more than 100 million albums sold, Olivia’s successes include four Grammys, numerous Country Music, American Music, Billboard and People’s Choice Awards, an Emmy Award, ten #1 hits and more than 15 top 10 singles. She recently scored another #1 hit, this time on the Billboard Dance Club Songs chart with “You Have to Believe,” a duet with her daughter Chloe Lattanzi – becoming the first mother/daughter duo to top this Billboard chart. In 1978, her co-starring role with John Travolta in Grease catapulted Olivia into super-stardom and to date remains the most successful movie musical of all time.

Throughout her career, the much-loved star has held many humanitarian and environmental causes close to her heart. Olivia served as Goodwill Ambassador to the United Nations Environment Programme, was the co-founder of Children’s Health Environmental Coalition (now Healthy Child, Healthy World) and, in 1992 she created National Tree Day in Australia, which is responsible for planting more than 10 million trees since its beginning. In 2008 she married “Amazon John” Easterling and together they are spreading the word about the importance of preserving the Rainforest by serving on the board of the ACEER Organization (ACEER.org). Most recently she co-founded One Tree Per Child, an international school initiative with the goal of having every child under the age of ten plant at least one tree.

In keeping with her wellness efforts, Olivia also is a very proud co-owner of the award winning Gaia Retreat and Spa in the Hinterlands of New South Wales, Australia. Gaia recently celebrated its’10th anniversary in 2015 and added 12 new international awards to their ever-growing list – including three prestigious wins including “Best Boutique Hotel” and the “World’s Best Day Spa” at the World Spa Awards. “Gaia is a place of total relaxation and one of my favorite places that I like to go to refresh, renew and restore my mind, body and soul,” says Olivia.

In 1992, Olivia was diagnosed with breast cancer. Her personal triumph against cancer led her to announce her partnership with the Austin Health and the creation of the Olivia Newton-John Cancer Wellness & Research Centre (ONJCWRC) in her hometown of Melbourne, Australia. After nearly ten years of fundraising close to $200 million, the ONJCWRC opened its doors in 2012. The Centre provides a comprehensive range of services and facilities for cancer treatment, education, training and research as well as a dedicated wellness center (oliviaappeal.com). “It has been my dream to create a healing place, within the hospital grounds, a sanctuary of peace, beauty and relaxation for cancer patients,” says Olivia regarding the Wellness Centre. In 2014, the Olivia Newton-John Cancer Research Institute, a not-for-profit medical research institute within the Centre was launched.

Continuing her efforts to create breast health and cancer awareness, Olivia launched the Liv Aid®, a breast self-examination aid that assists women to exercise breast self-exams correctly. Olivia credits her own breast self-exam as the first step to her eventual diagnosis of breast cancer. Now 24 years later (and cancer free), she has become a passionate advocate in creating awareness for early detection and encouraging women to take a more active role in their breast health.

Olivia’s appeal seems to be timeless. She is currently selling out her acclaimed “Summer Nights” concert residency at Flamingo Las Vegas through December 2016 and, is thrilled that a portion of every ticket sold to her Flamingo shows benefits the Wellness Programs at the ONJCWRC.

Her latest recording, “LIV ON,” a collaborative, inspiring new CD with friends Beth Nielsen Chapman and Amy Sky is intended for those who wish to transcend loss while walking a journey toward new-found meaning and hope, was released in October 2016. With her current and ongoing projects and philanthropic endeavors, Olivia’s worldwide popularity is as strong as ever! For more information visit OliviaNewton-John.com or follow her on Twitter @OliviaNJ or Instagram @TheRealONJ. 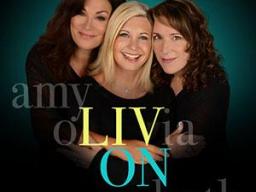 Olivia Newton-John, Beth Nielsen Chapman, and Amy Sky collaborate and record an eleven-song collection intended for those who wish to transcend loss.