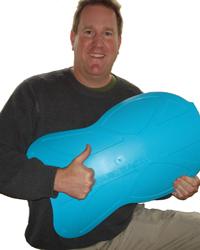 Paul Hagen is CEO and Co-Founder of VacuPractor. Paul is the "Enhancer", and along with the genius behind the scenes, Russell Notestine, better known as the "Inventor", are bringing the revolution of the century to people suffering with lower back pain.
Paul has suffered from lower back pain since his time in the United States Marine Corps. Paul received his BSBA degree from George Mason University, and his MSM/MBA from Boston University.

Paul lives in Redmond WA with his wife, and their cat Whittamer.