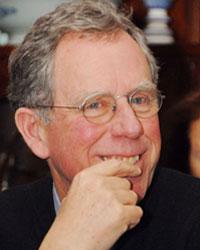 He is a graduate of Haverford College, holds a Master's Degree in the Philosophy of Religion from Union Theological Seminary and Columbia University, and a Ph.D. from Columbia in Philosophy. He is the author of Restoring the Public Trust: A Fresh Vision for Progressive Government in America, and Ethics, Economics and International Relations: Transparent Sovereignty in the Commonwealth of Life, Second Edition. It is published in North America as The Commonwealth of Life: Economics for a Flourishing Earth, Second Edition.

Peter Brown is actively involved in conservation efforts in the James Bay and Southern regions of Quebec, and in Maryland. He operates tree farms in Maryland and Quebec and is a Certified Quebec Forest Producer, and in 1995 was Tree Farmer of the Year in Garrett County, Maryland. He is a member of the Religious Society of Friends.