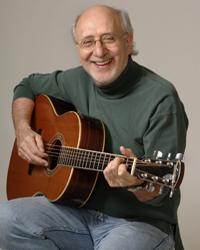 About Peter Yarrow
As a successful artist and activist, Peter Yarrows talent is legendary. His gift for songwriting has produced some of the most moving songs Peter, Paul & Mary have recorded, including Puff, The Magic Dragon, Day Is Done, The Great Mandala and Light One Candle. His musical creativity has always gone hand in hand with his commitment to social justice and equity in society.

Yarrow has been on the front lines ever since the Civil Rights Movement of the early sixties. As a performer & social activist, Peter has used music to inspire & bring people together to create a more just, peaceful and compassionate society. Many issues have moved Peter Yarrow to give his time and talent over the years; equal and civil rights, human rights, hospice, public broadcasting, the nuclear threat, equal rights and more.

Yarrows most recent efforts are focused through a non-profit he founded in 1999 called Operation Respect, that disseminates a free program utilizing music, video and classroom curricula to help establish safe, compassionate and nurturing environments for children in schools & summer camps across America. This project is based on his passionate belief that music, with its power to build community and catalyze change, can be a powerful educational tool and source of inspiration for children and educators alike. In recent years, Yarrow has received two honorary PhDs for this work and a unanimous vote honoring the work of Operation Respect by the United States House of Representatives.

Reflecting upon his almost five decades of music-making during which he saw so many positive changes taking place, Peter notes, "We've lived through a time in which people realized that, by working together, they could move towards a more just, more humane and peaceful world. We may not have achieved all of our dreams in the time frame that we once believed was possible, but the undeniable successes of the millions of people who walked the path of commitment for a better future, and the magnitude of what is yet to be achieved, make this long walk ever so much more hopeful. With strong voices and full hearts, in song and in deeds, we will carry on together for the generations yet to come.

Highlights of Peter Yarrows honors and awards:
American Jewish CongressThe Allard K. Lowenstein Award, for remarkable efforts in advancing the causes of human rights, peace and freedom,1982
Trans Africa forumIn recognition of twenty-five years of commitment to justice, peace, and human rights, 1986
PS 6 Auditorium, New York, NYThe Peter Yarrow Auditorium, In honor of Peter Yarrow: an alumnus, a parent, a benefactor, and friendour magic dragonwhose music resounds in our conscience and whose joy and love inspires us all, renamed and dedicated 1989
Miami Jewish FederationTikkun Olam Award, 1995
University of Notre DamePeter Yarrow Award for Peace Studies given to Notre Dame students, created 1996
People for the American WayDefenders of Democracy Award, to ordinary people who have done extraordinary things, giving their time and energy to defending our liberties and our democracy, 1999
Central Synagogue, NYCShofar award, "For fulfilling a lifelong commitment to tikkun olam, in accordance with the highest principles of the Jewish people, 1999
Reclaiming Youth InternationalThe Spirit of Crazy Horse Award, 2000
Kentucky School Counselors AssociationSchool Counselor of the Year Award, 2001
The Life FoundationGandhi World Peace Flame, 2001
Project LoveRescuer of Humanity Award, 2001
Starr Commonwealth FoundationStarr Commonwealth Board of Trustees Child Advocacy Award, 2001
Honorary Doctorate of Letters, from National Lewis University, Chicago, Ill., May 2002
Educator of the Year Award from New York State Association for Supervision And Curricular Development, 2002
Honorary Doctorate of Letters, from San Francisco State University, to be awarded May 2003
Named one of 100 Most Notable Cornellians in April 2004
Jewish Leadership Award, presented by PANIM in May 2004
Inspirational Leadership Award, presented by Jobs for Americas Graduates in Dec. 2004
Legendary Artist Award presented by Americans for the Arts in Jan. 2005
Sammy Cahn Lifetime Achievement Award from Songwriters Hall of Fame in June 2006
Distinguished Peace Leadership Award, presented by the Nuclear Age Peace Foundation, October 2007