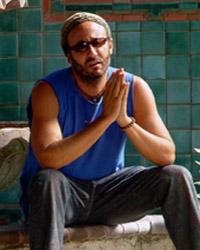 Born of French/Lebanese descent, Philippe Caland grew up in Paris and Beirut and attended the American College of Paris prior to relocating to the United States in 1985.

Philippe became interested in the film industry in 1987 and wrote the story for Boxing Helena, which Jennifer Lynch adapted into a screenplay in 1993. Caland served as producer on the film which led he and co-producer, Sean Penn, to be nominated for an Independent Spirit Award for 'Best Feature' for the film, Loved in 1998.

In 2004, Caland wrote, directed and starred in Hollywood Buddha, a film loosely based on his quixotic attempts to place his 1994 film, Dead Girl with a major distributor. The film was an 'Official Selection' at the South By Southwest Film Festival, the Paris Film Festival and the New York/Avignon Film Festival and won the 'Best Film' and 'Best Director' awards at the Taos Vision Quest Film Festival.

Caland is also the founder of Econology, an organization that promotes environmental sustainability.