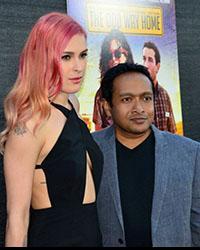 Rajeev Nirmalakhandan is a writer and director, propelled across the globe from the tiny island of Sri Lanka. He has a strong background in fine arts, extensive experience as an editor, and director.

Rajeev has a film degree from the UCLA School of Film and has directed a feature that received distribution and is available on DVD. He has written, directed, and edited commercials, documentaries, and short films. His work has screened at festivals, been recognized for awards and is distributed widely on DVD. His experience in development as a reader and intern at Universal Pictures, DreamWorks Studios and various other companies has rounded his understanding of the business.

He has a unique sense of humor and a love for flawed, lovable characters who fight great odds to reach their full potential. His artistic slant gives him a passionate approach to creating beautiful visual windows through which he shares his tales. He takes a full rounded approach to filmmaking, from crafting the story, delving into producing, to articulating every aspect of the frame, directing and editing. He infects his collaborators with his explosive passion for the craft he relishes in. He pushes for perfection but does so while cultivating a positive and collaborative environment.

He teaches directing, editing, documentary filmmaking, and cinematography at The Creative Media Institute, a film school in New Mexico. He co-founded the creative production company, Slant.tv. He co-wrote and directed The Odd Way Home.