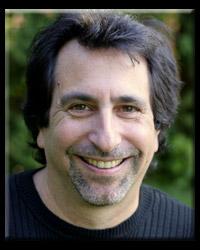 Raphael Cushnir is a leading voice in the world of emotional connection and present moment awareness. He has shared his unique approach to personal and professional development with millions of readers in O, The Oprah Magazine, Beliefnet, Spirituality and Health, Psychology Today, and The Huffington Post. He is the author of five books, lectures worldwide, and is a faculty member of the Esalen Institute, the Kripalu Center for Yoga and Health, and the Omega Institute for Holistic Studies, In addition, he coaches individuals and teams at Fortune 100 companies, governments, religious organizations, and leading non-profits. Raphael's own heart was opened by an experience of profound grief.

Cushnir's first book, Unconditional Bliss: Finding Happiness in the Face of Hardship Quest, was nominated for the year 2000 Books for a Better Life Award. It introduced a simple yet profound process called Living the Questions. You can learn more about the book and the process here.

Cushnir's second book, Setting Your Heart on Fire: Seven Invitations to Liberate Your Life Broadway Books/Random House, was published in 2003 and is currently used as a major teaching text at spiritual centers around the U.S.. The books Seven Invitations comprise an invigorating, step-by-step process for reopening and reawakening even the most wounded of hearts. You can learn more about the book and the invitations here.

In 2005, Chronicle Books released How Now: 100 Ways to Celebrate the Present Moment. This gift book, with 20 full-color photographs and a highly accessible version of his core principles, quickly became Cushnir's bestseller. A companion card deck soon followed. How Now was chosen as one of the Best Spiritual Books of 2005 by Spirituality and Health Magazine. You can learn more about the book and deck here.

In January 2009, HarperOne published Cushnir's The One Thing Holding You Back: Unleashing the Power of Emotional Connection. This project brings together all of Cushnir's insights, principles, and practices regarding the realm of emotion and it's key role in every form of well being and success. It introduces the "2 X 2 Process" and its encapsulation as "emotional surfing." You can learn more about the book and emotional surfing here.

In August 2009, Chronicle Books released Surfing Your Inner Sea: Essential Lessons for Lasting Serenity. This latest effort is not a guidebook in the traditional sense. Instead, Cushnir draws his serenity lessons from the most surprising sources the demise of a marriage, a scuttling lizard, an imposing skyscraper, and a childs card game. These lessons demonstrate how anyone, at any time, can find presence, passion, and abiding joy. You can learn more about the book here.

Cushnir grew up in Northridge, a San Fernando Valley suburb. He entered college at the age of sixteen, attending the College of Creative Studies at the University of California, Santa Barbara, followed by Reed College and UCLA, where he graduated at the age of nineteen. After working his way through school as a teacher and a storyteller, Cushnir redirected his energies as an activist for the environment and human rights. He devised innovative media campaigns that included such celebrities as Madonna, Pearl Jam, Demi Moore, and Michael J. Fox.

His passion for filmmaking led to a decade-long stint in Hollywood. He wrote, directed, and produced a Showtime movie, Sexual Healing, starring Helen Hunt, Anthony Edwards, and Jason Alexander. The film was nominated for two Cable Ace awards and won Grand Prize at the Houston Film Festival. Designed by Cushnir as a not-for-profit venture, it raised over 30,000 for the Minority AIDS Project.

Cushnir has also written scripts for the Geffen Company, Warner Brothers, and Columbia Pictures. In addition, his articles have appeared in Mother Jones and LA Weekly, and his children's book, The Secret Spinner, was published in 1985. With the advent of multimedia, Cushnir co-designed the 5 million techno-spiritual odyssey, Obsidian, which Gamezilla magazine called "the very best game in any genre."

In 1996, both his career and his marriage fell apart. "It was a classic dark night of the soul," he remembers. "Many people experience something similar in their own lives. The particulars are always different but the essential experience is the same a deep, depressing, gut-wrenching pain. In my case, everything I thought I knew about life went completely out the window."

Then, luckily, one of Cushnir's mentors convinced him to embrace the pain instead of turn away from it. He suggested that, in fact, this was a perfect opportunity to "wake up."

Cushnir took his mentor's advice and ran with it. Over a decade later he's waking up still, one moment at a time. Helping others do the same has become his new life mission.