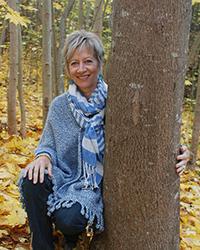 Rashana is a mother of two who lives in the beautiful province of Nova Scotia, Canada. Her work has been, and continues to be, ground-breaking in the field of personal development. From the creation of Rashana Sound Essences in 2003 to The Freedom Release Technique in 2013, she is a true pioneer. Her personal expansion started in 1997 when she became a Reiki Master. She is also a Certified Hypnotherapist and holds a diploma in counseling and Human Services as well as being trained in a variety of other healing modalities.

Rashana has appeared on national television and several radio shows. She is the author of six books, three of which are channeled. Her personal development workshops have been described as world class. More recently Rashana's intuitive work has expanded into channeling The Council of Nine and led to the development of the Freedom Release Technique, a powerful clearing method that attracts a global clientele.
Rashanas greatest joy is in supporting humanity through these ever-changing times and many are moved by the compassionate guidance and clarity that Rashana brings to their lives.