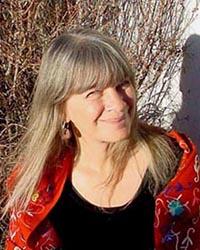 Renna Shesso, is a shamanic healing practitioner and teacher, and a reader and teacher of Tarot. She's the author of A Magical Tour of the Night Sky and Math for Mystics, and she researches and writes on a range of spiritual, artistic and Goddess-infused topics.
Shamanism, Tarot, that erratic array of other subjects: All are deep-rooted and bright-sparking in the heart of her personal life. This stuff is real, and she lives here.


Among her grandparents were an astrologer/herbalist on one side and an organic gardener/lapidary on the other. Renna began learning casually about plants, astrology and gem-lore during her childhood.
This expanded erratically into other, more occult studies, and she gradually stepped onto a Goddess path in the late Seventies. A few years later this formalized into the practice of the nature-oriented path sometimes called the Craft. Privileged to study with many fine teachers, she always seem to return to Nature Herself as the ultimate teacher and healer.


In the late 80's, Renna began learning the practices of shamanism, and has found that for her the Craft and shamanism combine well to form a balanced and complimentary practice. Extensive formal training in core shamanism has come mainly through The Foundation for Shamanic Studies and Sandra Ingerman author: Soul Retrieval, Shamanic Journeying: A Beginner's Guide and more, but again, much of the learning comes within the journey experience, directly from the guides in nature and Non-Ordinary Reality.


Since 1991, Renna has been teaching about and using the healing practices of shamanism. She also teach classes on Tarot and other metaphysical subjects. Math for Mystics was released by Weiser Books in March 2007, and a new work, A Magical Tour of the Night Sky: Use the Planets and Stars for Personal and Sacred Discovery, came out in late 2011.


In terms of what she writes about and researches, she likes the term "independent scholar" that may be a polite way of saying "quirky amateur," but, hey, it's time quirky amateurs got their due.


A beautiful group called The Circle That Has No Name has been her delight and support for almost 20 years. They are eclectic, spontaneous and spend a lot of time laughing and working deep.