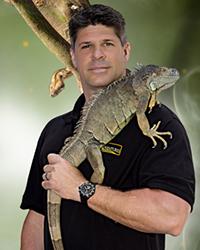 Meet Pierce's dad, Rick He's the Scaly Dad As the Creator and Executive Producer of Scaly Adventures, he specializes in all things big, tough and scaly. He is also the underwater expert and loves to lead the Scaly Adventures Crew on incredible journeys to show viewers places and animals they might not ever get to see.

Rick's favorite part of filming Scaly Adventures is using the latest technology to get Scaly fans as close to the animals and action as possible, so viewers feel like they are experiencing the adventure firsthand

Rick is responsible for all of the filming, editing, engineering and production of Scaly Adventures' educational material and programming and he also presents on the show.

Rick's primary reason for starting Scaly Adventures with Pierce and Tanya came from a passion for snakes and reptiles. In fact, this all started with a Red Bellied Snake he rescued from the clutches of his lawnmower When Rick isn't in the editing studio, you can probably find him up to his thighs in swamp water filming upcoming episodes of Scaly Adventures.

Rick is the co-founder of Boundless Limits International, Inc. and Live Guilt Free, along with his wife and Pierce's mom, Tanya. Together they host WATC TV's Atlanta Live and WGGS TV's Nite Line, and together they write books to preserve marriage and families. Rick is a Distinguished Military graduate of Kennesaw State University and is listed among their Notable Alumni. Rick, is also a Second Degree Blackbelt in Olympic Tae Kwon Do