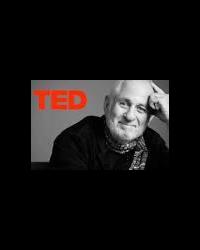 Described by Fortune magazine as an “intellectual hedonist” with a “hummingbird mind,” Richard Saul Wurman has always sought ways to make the complex clear. He has written, designed and published 83 books on topics ranging from football and healthcare to city guides, as well as two books on Louis I Kahn (including the first to be published on him in 1962), his mentor, but he likes to say that they all spring from the same place – his ignorance.

Wurman received both his M. Arch. & B. Arch. degrees from the University of Pennsylvania in 1959 with the highest honors, and was awarded the Arthur Spayd Brooke Gold Medal. He is FAIA and is the recipient of four honorary doctorate degrees, two Graham Fellowships, a Guggenheim and grants from the National Endowment for the Arts as well as recently becoming a Distinguished Professor of the Practice of Design in the College of Arts, Media and Design at Northeastern University. He is the recipient of the Lifetime Achievement Award from the Smithsonian, Cooper-Hewitt National Design Awards. He has been awarded the Annual Gold Medal from Trinity College, Dublin, Ireland in Discourse, the James Joyce Award given by the Literary and Historical Society of University College, Dublin and Boston Science Museum’s 50th Annual Bradford Washburn Award. In 2013 he gave the commencement speech at the Harvard Graduate School of Design, received the Gold Medal from AIGA in 2004, the Art Directors Hall of Fame and the Chrysler Award for Innovation and Design.
Wurman lives in Newport, RI with his wife, novelist Gloria Nagy, and their three yellow labs, Abraham, Isaac and Jacob.
Wurman also created and chaired the TED conference from 1984 thru 2003, the TEDMED conference from 1995 to 2010 as well as the eg and WWW conference. His next gathering will be the 555 conference, consisting of 5 experts, 5 predictions of future game changing patterns for 5 years in the future…FINDING THE FUTURE FIRST™.