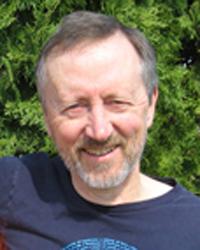 Buddha at the Gas Pump's creator and "chief cook and bottle washer" as he calls himself, is Rick Archer, a long time spiritual practitioner. At 17 it "dawned" on him there was such a thing as enlightenment and then realized it was life's ultimate goal. After another year of exploring drugs, Rick saw the futility of that approach and found and learned Transcendental Meditation. He then taught it for another 25 years.

While he is no longer affiliated with any particular spiritual organization, Rick has meditated regularly now for 46 years. He says he's good at routines. Rick was inspired to create Buddha at the Gas Pump, as the site of his popular collection of interviews about "Ordinary" Spiritually Awakening People because he says he's good at asking questions.

As friends encouraged him to "think big," Rick moved on to the internet with batgap.com. It now archives over 230 free interviews telling powerful personal stories ranging from near-death to full enlightenment. Rick sees himself as a connector and a collector, a catalyst for more awakenings.