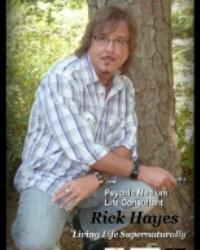 Rick Hayes is the founder of LifesGift, Inc. an association that supports his consultation and speaking engagement services. As a psychic medium and life consultant with unique abilities, Rick consults on a daily basis with those that have questions on life and the life-after. As a speaker and lecturer, Rick has shared his unique insight with inspiration and enthusiasm to thousands since 2003.


As a published author, Rick's books include Stepping Stones Thoughts Along Life's Path and You're not Crazy, You Have A Ghost. Rick's articles appear on numerous print and online publications. Rick is also the creator of the highly received "BELIEVE" workshops.


Rick is a media favorite appearing on television, film, radio, and print media including appearances on The Travel Channel, SYFY Network, Chiller Channel, Fox Television, and Sirius Satellite Radio. Rick is also the host of the weekly syndicated internet radio show, "Reflections with Rick Hayes." Rick is featured in the docu-film "The Possessed" NBC Universal/Spooked Productions and "Soul Catcher" NBC Universal/Spooked Productions on the SYFY Television Network. Rick also appears on the Travel Channel's "Most Terrifying Places In Americ" and "Children of The Grave 2" NBC/Chiller Network.