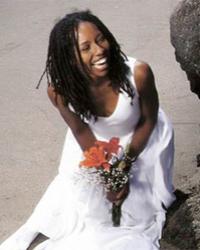 Rickie Byars Beckwith is one of the 21st centurys most revered singer-songwriters whose transcendent music opens the heart, touches the soul, and uplifts the spirit.

Supreme Inspiration is produced by jazz-hop sensation, Georgia Anne Muldrow, who happens to be Rickies daughter. Together, their talents combine to tell a story of love, life, and the harmonic transformation of a world realizing its next possibility.

Rickie's extensive music catalogue is heard on the radio and on soundtracks for movies and television. Her songs of unconditional love and spiritual transformation are the highlight of consciousness raising events throughout the world. She has performed in five sessions with His Holiness the Dalai Lama, at Green Festivals across North America, and at countless Peace Concerts that promote unity and the principles of non-violence.

"Spirit encourages me to be a voice of inspiration," says Rickie. In being an example of change and possibility, Rickie supports numerous organizations that work tirelessly to help improve the lives of others. Several times each year, Rickie organizes benefit performances and music compilations that help gather ideas and resources that bring Water to a Dry Land.

Backed by some of the most accomplished musicians from Los Angeles and beyond, the Agape International Choir is heard daily throughout North America, Europe, Ghana, South Africa, Egypt, India and all places in between. Featured guest artists who regularly perform with the Choir include John Legend, Will.I.Am, Stevie Wonder, Niki Haris, Brenda Marie Eager, and Tim McAfee-Lewis.

Rickie was born and raised in Charlotte, North Carolina before moving to Atlanta, Georgia. She is a natural and self-taught musician who began singing when she was three years old, appearing in Miss Anita Stroud's Tots Choir in Charlotte. Early influences include Nina Simone, Curtis Mayfield, the music of Motown, Liverpool, Stax Records, and the early gospel music of Sam Cooke and the Soul Stirrers. Rickie's fans know her as the lead singer in the New York Jazz Quartet, the Pharoah Sanders Ensemble; and as the lead singer in the Ronald Muldrow Ensemble.