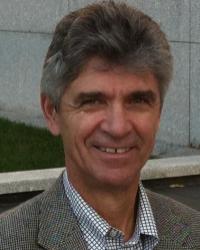 Robert L. Weber, Ph.D. (Bob) is Assistant Professor of Psychology, Part Time in the Department of Psychiatry at Harvard Medical School and a former Jesuit. He is the 2014 recipient of the American Society on Aging’s FORSA Award (Forum on Religion, Spirituality and Aging) recognizing his leadership, locally and nationally, in exploring the role of spirituality and religion in the aging services field.

Following graduation with honors from Princeton University, Bob began a Master of Arts in Teaching degree program (M.A.T.) at Harvard University. After his first year of study and teaching in the Harvard program, he entered the New England Province of the Society of Jesus at the age of twenty-three. After the two year, Jesuit novitiate Bob returned to Harvard, completed his M.A.T. degree, and then, began and completed a three year Master of Divinity degree with Distinction in preparation for ordination as a priest.

Bob lived, worked and trained as a Jesuit for almost ten years after which time, with much discernment, he decided to leave the Order. In the meantime he had pursued doctoral training in clinical psychology at Temple University in Philadelphia. While there he studied with Diana Woodruff, a professor and protégée of James Birren, a pre-eminent gerontologist at USC. As the fruit of these studies he wrote his master’s thesis in psychology on “Value Changes and Adjustment in the Elderly.”

When Bob entered his mid-fifties, he began a personal and professional journey intended to integrate the three major threads of his life: psychology, spirituality, and aging. Over time he became an active member of the American Society on Aging and served on the Leadership Council for the Forum on Religion, Spirituality and Aging. He began giving talks and leading workshops on spirituality, aging and mental health across the country.

At the Massachusetts School of Professional Psychology (MSPP) Bob established a Conference on Spirituality, Aging and Mental Health that is co-sponsored by MSPP’s Center for Mental Health and Aging and its Center for Psychotherapy and Spirituality. He served the latter as an Advisory Board member. He also served in an advisory capacity to the spiritual outreach program of Somerville-Cambridge Elder Services.

Together with his colleague, Dr. Jane Marie Thibault, a gerontologist and Professor Emerita at the University of Louisville (KY) Medical School, Bob established a website and blog, www.ContemplAgeing.com, to disseminate ideas about the integration of spirituality, aging and mental health. He serves as editor and chief blogger of this website, www.SpiritualityOfAge.com, the website based on the book he co-authored with Carol Orsborn, Ph.D.

Bob has a private psychological practice in Cambridge, MA where he resides with his wife who is also a psychologist.

Spirituality of Age: A Conversation with the Co-authors