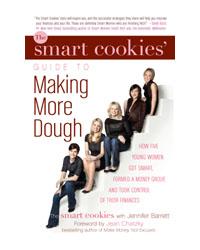 About Robyn
As a social worker, Robyn had chosen a career that she was passionate about but one that would not necessarily bring her riches. Also, she had accrued more than 12,000 in debt since divorcing two years earlier, and was struggling to keep up with bill payments on her limited income. She has learned that she can have it all and has found personal fulfillment and doubled her earning potential by obtaining her Master Degree in Social Work. She has now sliced her debt in half and recently purchased her second condo, which she shares with her pampered pooch, Lucy.

The Smart Cookies
Just a few years ago, we were like many women in their twenties and thirties; despite great jobs, we were drowning in over 40,000 of consumer debt. Inspired by an episode of "The Oprah Winfrey Show" on personal finance, the five of us formed a money group, and together, developed strategies for turning our finances around - without sacrificing our fabulous style or social lives. Just one year later, we had dramatically improved our financial situations - and had made major advances in our careers, relationships, and life goals. Our proven system for success has been featured on "The Oprah Winfrey Show", MSNBC, and in the New York Daily News and Money Magazine.

We are now the hosts of a fresh, new TV show on the W Network and the authors of The Smart Cookies Guide to Making More Dough, which will assist readers in achieving their financial dreams and goals without drudgery or deprivation.